History of the hut

The mountain hut »Koča na Planina pri Jezeru« stands above a lake in the heart of the Fužina pastureland. In 1975, our alpine club (then called INTEGRAL) rented there a cheese-dairy from the Pasturing Community of Stara Fužina, and re-arranged it into a mountain hut. Unfortunately, on 31 July 1981, the hut burnt down to the ground. The very same year, the members of the alpine club decided to build a new hut. They bought the burnt-down place and some land around it and built, on the foundations of the old house, a new, contemporary mountain hut, which was opened at a ceremony on 2 September 1984.

The hut has two catering rooms with 80 seats on the ground floor. Upstairs, there are eight rooms with altogether 80 beds. The winter room at the back of the building has nine beds. There are two toilets with washrooms on both the ground-floor and first floor. The restaurant area is heated by a stove. The hut has its own power supply – a generator and a photo-voltaic station (solar energy) – and its own supply of drinking water.

The hut offers accommodation for organised groups of mountaineers, alpine schools, courses and meetings; tourists wishing to enjoy the beautiful nature and warm hospitality may also spend a few days there.

Operating time: from beginning of June until end of September. A winter room is available during the time of closure.

The Alpine Club LPP is closely linked to Koča na Planini pri Jezeru. Some 20 years ago, only a few romantic mountaineers knew the Fužina Pastures, this delightful world of hidden beauty. Also, in the past, few could afford more than one-day trips to the mountains.

When the alpine club people opened a mountain hut there and took over the maintenance and marking of the trails, this region became accessible to a wider circle of fans. The awards this hut has received as the cosiest mountain dwelling in several successive years, speak for themselves. The hut is also an information point for the Mountain Rescue Service in case of accidents.

Through opening the hut and maintaining the trails, the Alpine Club LPP has not only made the Fužina Pastures accessible to a larger number of visitors but also assumed responsibility for the protection of nature. We try hard to avoid pollution from the increased number of visitors by organizing cleaning campaigns and placing warning signs. Visitors are kindly invited to join in these endeavours and take their refuse back to the valley. And, if they don’t mind, take with them also what they might find hidden under a rock, in a hole – or just thrown away – so much the better! 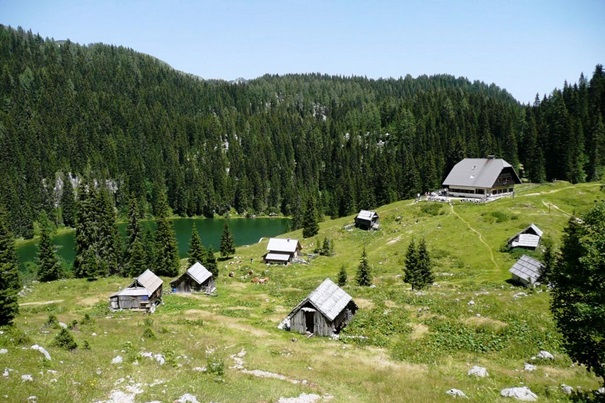